An Appeal to the Ancestors

Last night I found myself praying to the egungun (the ancestors.) For what? For the energy to continue on this path. The truth is – beginning and maintaining a blog has been a struggle so far. Isn't Facebook enough? That's what I ask myself. And what about the past 4-5 years of working toward this film? Isn't that enough? The answer isn't what I want to hear – it's not enough.

And that's why I appealed to the ancestors. Although I once earned a living with words (working as a news reporter in the Virgin Islands) – I don't always feel inspired to write. I tend to do things when I feel inspired. But when the inspiration comes, it really comes and that's what I'm praying for.

I sense we are about to receive major funding for the film. Because I've been working so hard for so long, the thought of being so close to the “target” makes me feel like relaxing. But there will be no relaxing. Now is the time for a renewed sense of energy, and urgency and light. 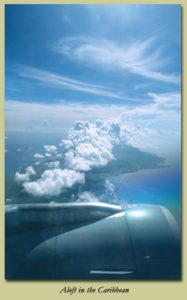 The Altar of My Soul

Image of St. Croix Virgin Islands shortly after take off

“The orishas demonstrate through natural acts that every element carries both positive, ire, and negative, osogobo, forces,” says Martha Moreno Vega in her book, The Altar of My Soul: The Living Traditions of Santeria. “Our own lives reflect the need to balance these positive and negative energy fields. If we pollute the ocean, it will cease to give us food. And the air that is essential to our lives must be kept clean if we are to survive. We are part of a divine creation. And I ask my godchildren to respect this creation, since orun, the spirit world, is spiritually united with aye, the world of the living, like two halves of a tightly fitted calabash.”

Published in 2000, The Altar of My Soul is a memoir of Vega's journey as a Yoruba priestess in Santeria. Dr. Vega is one of the scholars that you'll get a chance to meet in the documentary film, Across The King's River. The current plan is to interview her in Puerto Rico. Although most of the film will be shot in Africa, it is important to pay tribute to the ancestors, and that's why I'll also be traveling to the Caribbean islands of Puerto Rico and St. Croix, Virgin Islands.

Without going to the Caribbean, I'll truly feel like an important component of the story is missing – part of my soul.
For more information about the life and work of Dr. Moreno Vega, visit: http://www.martamorenovega.com/ 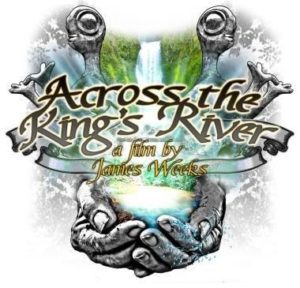 The Encounter With Destiny

Image on one of our King's River T-shirts

If someone told me I would be working on a film several years ago I doubt I would have believed. And when Ifa diviners told me that I will one day I will become a diviner as well, I had a hard time believing that as well. But as my journey continues I’ve come to the realization that what we think of ourselves has nothing to do with our capability and what blocks us from reaching our true potential is often blindness and our unwillingness to trust where the Spirit World is trying to lead us.

But without trust there can be no growth. Without risk there can be no reward. No one will support any dream of yours until you begin to honor it and support it yourself. What steps will you take to support your dream today? 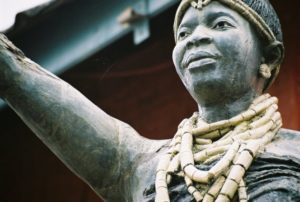 The Beauty of Adversity

Hard, frustrating- that's how I would describe my last trip to Nigeria in 2008. I went to start laying the foundation for the film, and I didn't have a crew. But I had the support of friends, the elders and the orisas. Why was it hard? It was hard because I didn't have time to shoot all of the footage I wanted. It was difficult because my dear friend Ifasola was working through some problems with his family and that distracted us from fully focusing on what we arrived in Nigeria to do.

I felt frustrated as I left Nigeria to return to the U.S. But as I look back at all the exciting developments that have occurred since that first trip, I can't help but feel inspired. Our website has come a long way, we have a growing Facebook presence, some of the world's leading filmmakers are now part of the team, and finally, we hope to have investors on board very soon to help bring this vision to reality.

Never abandon the dream. Remain committed to the very end. Never let hardship deter you from following the path your heart has illuminated for you.

Chief Aseda outside his compoun

“Ajuba Akoda, Ajuba Aseda” means “we pay homage to Akoda and Aseda.” In the Yoruba spiritual tradition, it is believed that Akoda and Aseda were the first disciples of Orunmila, the orisa of wisdom.

It is said that Akoda was the first to practice divination. And Aseda taught the elders wisdom. The current Aseda Agbaye (of the world), is the elder that you see in the trailer for this film. He is like a father to me. And I’m proud to say that he thinks of me as his son.

The first time Aseda divined for me, he uttered a few words that changed my life, and sent me on this journey into the unknown. It hasn’t been an easy journey but as I look at how far this film project has come and where Ifa predicts it will go, I’m filled with humility, inspiration and deep reverence for the elders, nature, the ancestors and the high spiritual forces that conspire to bring this visionary film to you.

Without Aseda’s guidance and spiritual support, it would have been near impossible to survive all the challenges I’ve experienced so far working on this film. But with “orisa all things are possible.” And as one Yoruba proverb says: “with 16 elders in the house of wisdom, how can we lose our way?”