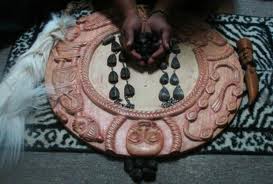 “An ancient legacy worthy of the most profound reflection! A classic of African and world literature! One of the great sacred texts of the world!”

This is how one leading African-American scholar describes the Odu Ifa, the sacred, texts of the Yoruba people of Southwest Africa, that traditionally, were transmitted orally from generation to the next.

In his book, Odu Ifa: The Ethical Teachings, Maulana Karenga, best known as the founder of Kwanzaa, says: “The Odu Ifa is a corpus of sacred texts designed to answer questions of human life through the process of divination. But they also contain a wealth of knowledge and teachings in various fields including, art, ethics, literature, medicine, history and religion.”

“We are told throughout the texts that we must be good parents, sons and daughters, friends and fellow human beings and that we should respect our elders and ancestors, with the understanding that our togetherness in harmony enhances our ability to bring, give and receive good in the world,” says Karenga.

“The Odu Ifa also reminds us of our obligation to the earth. It urges us to avoid plundering, polluting and depleting the earth in our pursuit of wealth and comfort,” adds Karenga.

There are a total of 256 sacred odus in Ifa, and it is believed that Orunmila, the orisa of wisdom, brought these mystic symbols from heaven to earth to guide humanity and to help people shape their lives. The first two disciples of Orunmila were Akoda and Aseda. It is said that Akoda taught Ifa divination to the world and Aseda served as an advisor to the elders.

Orunmila knows the past, the present and the future, and is sometimes described as a scholar who speaks all languages or as “the little black man whose head is full of wisdom.” It is believed that Orunmila witnessed the creation of the universe and can unlock the secrets of your destiny because of his intimate knowledge of all things.

Other verses stress the importance truth, humility and character: “He ran briskly, he walked smartly. Sharp, brisk marching is Tiger’s style of movement. Orunmila was descending from heaven to be honorable on earth. They said that when Orunmila gets to the world, he must not show any arrogance or pride. That he must comport himself in lowliness and humility. Orunmila got to the world; he acted humbly. He was never proud. He accommodated everybody. He won honor and dignity.”

The Odu Ifa also represent energy patterns. “The odus are divine forces which are applicable to every event in the past as well as in the future. Each odu indicates that there is an order and pattern in the events of human life,” says the late Afolabi Epega, in the book, Obi Divination.

“For every major event in your life, you need an odu to guide you,” Epega adds. “The odus represent all the activities in the universe. There are 16 major odus. The first two major odus, Eji Ogbe and Oyeku Meji are the two cosmic forces that represent male and female energy.”

“Ejiogbe represents the masculine force and Oyeku meji represents the feminine force. Ejiogbe and Oyeku Meji gave birth to the remaining 14 major odus. Like the universe, each odu consists of a pair of opposites: finite and infinite, odd and even, hot and cold, positive and negative, good and evil, male and female. The odus are regarded as the expanding and contracting principles of human experiences,” says Epega.

This concept of duality, known as yin and yang in Asian philosophy, extends to every aspect of life and creation. The notion of absolute good or absolute evil does not exist in Ifa. Good and evil are merely two sides of the same coin. Being ill, for example, is not good, but it can be good if it forces you to re-examine your lifestyle, reflect on your values and shift your priorities. Getting a promotion at work is good – but it is also bad if it causes jealousy or gives you undue stress.

The key to understanding Ifa? It’s all about balance, character, reverence for the spirit world, the orisas and the ancestors.

For more information about Ifa, be sure to see the upcoming documentary feature film Across The King’s River. Visit www.acrossthekingsriver.com