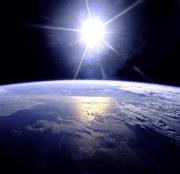 The poetic elegance of the Yoruba creation story moved me.

And I thought about it for days. It made me reflect on spirituality as well as what science says about the birth of humanity and the origins of the universe.

Here’s an excerpt of the sacred story as related by Ifa priest, Chief Solagbade Popoola

According Popoola, who has authored several books about Ifa, our sacred teachings insist there were five stages of creation. In the first stage, the universal spirit, Akamara, created a grain of sand, “blew its mighty breath into it and transformed this grain into a basket of sand from which hot gases and dews began oozing out.

Then, a mighty explosion ensued for an “uncountable period of time and the whole universe was engulfed in gases and dews.”

Ifa says, “the mightiness of the whole universe today is just the breath of Akamara.”

Here’s my question. Could the mighty explosion be a reference to the Big Bang that science refers to?

In stage two, “the solidification of gases and dews into stars and other heavenly bodies brought about another development. It was discovered that the stars and other heavenly bodies were too hot and would not be able to accomplish the mission which Akamara created them for. These stars needed to cool down from their ultra high temperature to a normal temperature.” Hence, Akamara created another being called Olu-Iwaye who successfully cooled down the stars and made it possible for them to solidify quickly.”

In stage three, a super being, or Irunmole, called Baba Asemuegun Sunwon was created because “it was discovered that the stars and other heavenly bodies had no orderly movement and were crashing into each another, causing mighty explosions. The mission of Baba Asemuegun Sunwon was to make all the heavenly bodies to rotate in an anti-clockwise orbit in order to stop what Ifa calls “The War of the Stars”. When this was done, the stars and other heavenly bodies stopped crashing into each other.

I was fascinated by the poetic imagery of stars streaking across the heavens against a darkened sky colliding into each other. In fact, I love it so much I’m toying with the idea of incorporating some of this imagery in my film, Across The King’s River.

But let’s move on.

In stage four, life was created on earth. The teachings of Ifa insist we are still in stage four but most evolve if we hope to survive and save the planet.

Very few would disagree with this, I’m sure. But can we summon the will? Time will tell.

I began this post by saying how the Yoruba creation story made me reflect on science and spirituality.

The creation story also made me reflect on one of my favorite books of all time: Vanishing Voices: the Extinction of the World’s Languages. (To hear my interview with Daniel Nettle, co-author of Vanishing Voices, visit:http://www.acrossthekingsriver.com/press/

You see, the sacred stories (and traditions) of the world are important not only because they allow us to glimpse into other cultures, but because they may help unlock scientific mysteries and provide answers to some of the most vexing challenges of our times.

But as the authors of Vanishing Voices point out: more than 90 percent of the world’s languages may die out in the next century, and when these languages die, we lose ancient knowledge, centuries and centuries of indigenous science and wisdom because the accumulated knowledge of humanity is encoded in language.

“We do not even know what exactly we stand to lose – for science, for posteriority – when languages die,” says linguist K. David Harrison in the book, When Languages Die. “An immense edifice of human knowledge, painstakingly assembled over millennia by countless minds, is eroding, vanishing into oblivion.”

Because Ifa is a vast body of ancient oral knowledge, surely it has a role to play in this crucial debate about vanishing languages and cultures.

May the ancestors grant us the wisdom and the fortitude to keep our sacred traditions alive.