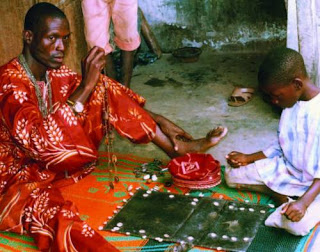 “I'm doing The Lord's Work.” That's what my friend, Ifagbemi Fasaye, said recently. Then we both bust out laughing. And the more I thought about it, the more I laughed. I'll be laughing for a very long time. And who knows, maybe I'll start telling folks I'm doing The Lord's work too. Sounds like a noble thing to say.

It's funny to me because Ifagbemi Fasaye is a babalawo. We are both babalawos. Ifagbemi is a Seattle-based Ifa priest who is deeply committed to his calling. Each month, he performs Ifa divination for an average of 40 clients and loves sharing what he's learned about the Orisa tradition over the years. He's a humble brother.

Like most African-americans, Ifagbemi was raised as a Christian before destiny called him to Ifa. The comment about doing The Lord's work struck me as a bit revolutionary and ironic because it challenges centuries of religious bigotry and arrogance. It caught me off guard and made me reflect too.

We are all used to Christian saying they're doing The Lord's Work. But Orisa folks? No. But why not? Since when do Christians have a monopoly on the use of the word “Lord”? Does it belong to them?

And even if they think it does, don't you think someone ought to tap them on the shoulder and correct them once and for all? It's 2013 – isn't it time for other spiritual traditions to lay claim to “The Lord” too? Just saying!

The sacred verses of Ifa sometimes refers to Orunmila, the orisa of wisdom, as Lord. In the Holy Odu, Osa Otura, Ifa says: “What is truth? Orunmila says: Truth is the Lord of Heaven guiding the earth, the wisdom Olodumare is using, great wisdom. Many wisdoms.”

As priests and priestesses of Ifa, we too are in the business of shaping lives, helping souls to heal. Ours is a rapidly growing global philosophy. We are here to stay. If we feel like saying we're doing The Lord's Work, then so be it – because we are. The Lord Orunmila, that is.

I'm not sure what my Mom will have to say about this. But then, again. She doesn't have to know and I don't plan to ask her. She's Roman Catholic and I went to church with her every Sunday as a kid – against my will. Mom was upset when I sent her a letter saying I was going to Africa to be initiated into Ifa.

That was back in 2002 and she still hasn't accepted it. “When are you going to go to church in Oakland?” she sometimes asks. I ignore the question. It ain't gonna happen. I'm an Ifa priest and I'm working on a film. I'm busy doing the Lord's Work.