Stepping Into The Unknown

When I began the journey toward my film in 2008, I never imagined that I would be invited to speak at Harvard University one day.

But it happened. Even though my film is not finished yet. (You can see a clip of my presentation below.)

I’m sharing this story with you because too often we limit ourselves. We imprison ourselves with negative thinking. We stop ourselves before we even give ourselves a chance to soar by venturing into the unknown.

And the unknown is where the action is..

My journey toward this film has not been an easy one. It has been full of challenges and setbacks along the way. And the challenges are far from over.

Why do I stay on the path?

Because I know Across The King’s River will have a significant impact in the lives of millions of people around the world.

I believe you can have a significant impact as well.

But only if you stay in your path. And step into the unknown with faith. 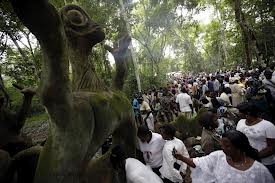 So you want to learn Yoruba?

The truth is that it's not as difficult as most Westerners make it out to be. In fact, if you can say Sango, or Ifa or Alaafia, there's absolutely no reason why you can't learn conversational Yoruba. You just have to make the effort to step your game up.

If it's not impossible to learn Yoruba what's holding folks back?

I'm not sure. I think most people in the Americas have gotten so used to people not speaking Yoruba that they've bought into some subconscious myth that says mastering “alaafia” is as far as you can humanly go.

Well it's time to bust that myth up once and for all. Here are some tips that have helped me on my journey to learning and speaking Yoruba:

Make It A Daily Ritual:

Let's get real. You need to take action. The language isn't just going to flow into your head without any effort on your part. If you really want to learn the language, then you need to make a commitment to study it every day. One of the best foundational books on Yoruba is Je K'A So Yoruba by Professor Antonia Yetunde Schleicher. Set a goal of studying for at least 30 minutes a day. Consider making it part of your daily spiritual routine.

Forget About The Tones:

Yoruba is a tonal language. A word can have several different meaning depending on the tones. This is where most folks miss the boat. They get so overwhelmed thinking they have to master each and every tone, they give up in frustration. Instead of stressing over the tones,simply listen to words as you hear them and try your best to repeat them melodically. Think about it. Isn't that how you learned English? By repeating what you heard? Do you think babies in Yorubaland start speaking by learning tones? Stop stressing about the tones and just go with the flow.

Focus on Greetings and Simple Phrases

Learn basic greetings and simple phrases. Learn how to say: Good morning! Did you sleep well? How is your husband? Your Wife? The Kids? How's work? Learn how to say who, what, where, when why. Learn how to count from 1 to 10. Then build and expand your vocabulary as you make progress. I never understood and I still don't understand why many people begin their Yoruba studies by trying to master esoteric Odu Ifa or incantations without first having the most basic understanding of the language. Start with the basics.

Practice by speaking to native speakers every chance you get. Or, practice with others who are studying the language. One of my best friends is a native Yoruba speaker and speaking to him every day helped me to progress rapidly in the early stages of learning the language. Now that Skype is readily available, you can befriend and speak to native Yoruba speakers anywhere in the world.

Remember You're On A Journey

Your study of Yoruba, or any language for that matter, can open doors for you and can enrich you spiritually, culturally and intellectually. Take time along the journey to celebrate each milestone. With commitment you can be speaking fluent conversational Yoruba in less than two years. Never give up. Keep your eye on the prize.

James Weeks/Producer, Across The King's River 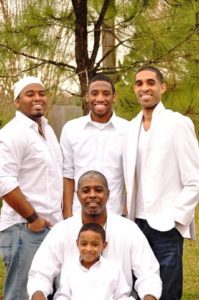 On The Mat With Baba Femi

Baba Femi and his sons

But a client has just dropped by to pick up ose dudu (spiritual soap) and Femi must attend to him first.

Femi explains how to bathe with the soap but the conversation doesn’t end there. Next, Femi talks to the client about Ifa ceremonies – “The Warriors” and the “Hand of Ifa” – how long the ceremonies take and what to expect after these rites of passage.

In the meantime, I’m still on hold.

But the wait is worth it. When Baba Femi finally wraps up with the client and gets on the phone with me, he delivers the goods: insights from years of studying and practicing the ancient wisdom known as Ifa.

He’s a teacher, a philosopher, a diviner, an author and a life coach rolled into one…

And while Baba Femi respects the Yoruba spiritual tradition because it’s our foundation, he’s a free thinker. He’s an avid student of spirituality who fuses numerology into his readings. He encourages some students to study tarot as well. He argues that African-Americans and Westerners are not Yoruba and have unique spiritual needs.

“Ifa is a universal system and should not be relegated to just a Yoruba cultural perception,” he says. “In Ifa, it is not about which way is right verses which way is wrong, it’s about understanding what works.”

“I am of the opinion that Ifa, left the shores of West Africa on slave ships in the minds and hearts of Ifa priests and priestesses to bring forth a new way, to see a new order and to follow new definitions. Not by choice but by destiny.”

Not surprisingly, Baba Femi’s business is expanding. Surprisingly, approximately half of his client base are Christians.

When he’s not in Houston, maybe you’ll find him in New York, or Seattle, or L.A or Atlanta, or New Orleans. One “Hand of Ifa” ceremony here, a “Warrior’s” ceremony there. A lecture here, a class there: readings, ebos – it never ends!

Last summer, I spent some time with Baba Femi, quietly observing and asking questions as he divined for clients in Oakland. He taught me some of his techniques. Those techniques have not let me down yet.

But I’m always hungry to learn more. And that’s why I check in with Baba Femi frequently.

Born Stephen Mackey in Houston Texas on December 30, 1957, Chief Mayegun Obafemi Fayemi was the fifth of Vivian and Fletcher Mackey’s six children. He comes from a long line of educators. His great grandfather worked in education under President William Taft.

At the age of 16 he had a vision, he says. A feminine angelic being visited him and guided him during rocky times. And like most African-americans, he grew up in the church and was once a Sunday school teacher. He’s also a former professional athlete and a retiree from Corporate America.

Like me, Baba Femi was also a student of the late Dr. Afolabi Epega, a renowned Yoruba Ifa priest (and scientist) who, perhaps, had one of the biggest influences on Ifa in the West. Dr. Afolabi Epega was the co-author of “The Sacred Ifa Oracle” as well as other books on the orisa tradition. There’s no doubt in my mind that Dr. Epega is still inspiring us in Spirit.

Here’s what Baba Femi had to say during our recent interview:

The Best Way To Connect to Ancestors:

Answer: “Be sincere. I don’t think you need to approach them with a rehearsed prayer. Simply be sincere. The universe hears one language – sincerity.”

What To Expect In A Good Reading:

Answer: “A good reading is about 70 to 75 confirmation about something the client already knows, has been feeling, thinking, praying for or wishing for. It gives you the confidence to make a conscious decision about how to move forward, let go of something, or step into something new.”

What To Do After The Reading:

Answer: Trust the process. Don’t be so quick to judge the outcome. That’s where all the insecurities, fears and doubts come in.

Answer: “Ifa is the wisdom of nature, the natural order of things, the sacred science of self and how self connects to the environment.”

Why More and More Christians Are Turning To Ifa:

Answer: “Christianity is based on a system of faith. What you don’t know, you believe. What you can’t get to, you hope. If you don’t understand, you pray. People don’t just want to believe anymore, they want to know. To be in a system of faith like Christianity, then to be around a system like Ifa where we say: ‘here’s what occurred 20 years ago, here’s what you did last week – to see that client get emotional about what you’re giving them (through divination) and how much it hit home, let’s me know one thing. They are not just Christians, they are human beings and as much faith as they have, in some areas they don’t have the strength to believe, they just want to know. Any person that wants to know has a right to know. Everything in life is based on a system of knowing. You want your mechanic to know how to fix your car, you want your teacher to know how to educate your child. You can’t walk into a bank and get a loan if they don’t know you. In Christianity they want you to just walk in and believe. You can’t ask questions because you’re not supposed to question.”

Answer: “Be diligent in your studies. You can’t put every scenario in a book. If you’ve already been through initiation to let the ase flow through you, then just let if flow. Be open to understanding. Odu is ever expanding. Learn the signs and the symbols.”

For a divination session with me. Contact me at james@acrossthekingsriver.com or by phone at 510-388-5500

James Weeks/Producer Across The King’s River 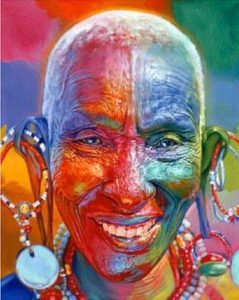 The Road To Empowerment

The ancestors are not there to give you what you want…

But they'll make sure you get what you need. Think about it. Why should they give you what you want when they know (and you know) you could do much better? Way better?

Why? To force you to grow spiritually and to prove to you that you don't really need half the things that you're chasing. And when the distractions fall away a beautiful thing happens…

You'll slowly begin to see and hear the spiritual world with greater clarity.

When you move closer to the Spirit World you'll also discover that many of your fears have no basis in reality. So much fear comes from being overly dependent on things or people that you think you need, when, in fact, you don't need them at all. In fact, they probably need YOU for more than you need them.

Your ancestors are working with you right now whether you realize it or not. What you're going through isn't a mistake – it's a plan to bring out the best in you so that, hopefully, you can live a more empowering and inspiring life.

Isn't it time you've realized this?

Contact me for an accurate and insightful spiritual reading today!