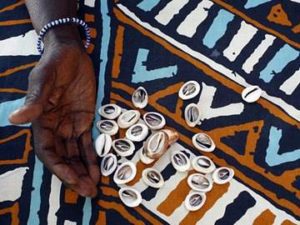 The question came to me from a student diviner earlier this week.

“When did you begin to realize that the orisas were communicating with you through divination?”

He asked the question because he was struggling with something many diviners struggle with – self doubt.

I wished more diviners would open up because the battle with self-doubt isn’t limited to student diviners. Many seasoned diviners struggle with it too.

Aspiring mediums and tarot readers battle with self-doubt too! And it goes even further. Most of the clients that come for readings struggle with issues of self-doubt and/or low self-esteem.

Self doubt is the human condition and it’s holding you back in many ways, preventing you from reaching your full potential, the greatness that is yours to achieve on earth!!

But here’s the advice I gave to my fellow diviner..

Whether you divine with obi, opele and ikin, it all comes down to consistent study, practice and experience. I recommend daily practice, and if you do it long enough you’ll get to the point where you see patterns emerge – patterns that tell powerful stories.

It’s also important to realize that you’re not the one doing the reading. Ifa, the orisas are doing it; you’re merely the messenger. Your focus should be on the orisas and the egun (ancestors), not on yourself. It’s not about you; it’s about the message.

Self doubt creeps in when you focus too much on yourself instead of the orisas.

You see, once you invoke the ancestors and the orisas and you work from a place of integrity and compassion, you have to trust that everything that comes through in the divination is relevant to the client even if you’re not sure how. Your job is to step out of the way.

And what’s my advice to those who battle with self-doubt but are not training to be diviners?

Trust your intuition, your feelings, your dreams, your heart. Know that the Spirit World is always attempting to communicate with you, to guide you. You are not only connected to Spirit, you are Spirit yourself. Make time each day to sit in silence to get in touch with your inner world. Don’t over-think the subtle messages that come to you; allow them to flow freely.

And trust, trust trust…You can’t be a vessel for Spirit unless you learn to trust!! 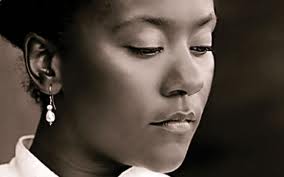 The sun was slowly descending when I spoke to Indra.

She lives in Denmark and the further north you go it’s the land of the midnight sun, she says. By the tip of Norway, it’s bright until midnight.

But winters there are the “darkest of dark”. And that’s one of the reasons why this gifted vocalist is looking forward to moving back to the U.S.

Indra Rios-Moore isn’t exactly a house-hold name yet, but give this New-York native and daughter of Osun some time. After all, you’re dealing with a powerful force of nature. And Osun cannot be restrained.

Indra “could easily approach the leagues of the great jazz singers like Ella Fitzgerald and Sara Vaughan,” says critic, Jacob Baekgaard, in an article published on www.allaboutjazz.com.

And Bessy Reyna, a columnist for CTLatinonews.com, says: Indra “is a remarkably talented singer who can render either a bolero like “Mil Besos” or a sensual “Teach Me Tonight” with equal easy, holding her audience in an intimate and warm embrace which is nearly impossible to escape.”

Born of a Puerto Rican mother from Ponce and an African-American/Syrian father, Indra has been singing since childhood. At 14, she attended the prestigious Mannes College of Music in New York. She later studied classical vocal training at Smith College.

She sings in Portugese, English, Spanish and Italian. And although she’s drawn to traditional jazz standards, re-styled American folk and RB songs, she’s plans to include a song for Osun on her next CD which will be recorded in August 2013.

To purchase Indra’s CD’s, visit her website at: http://indra.dk/sider/info_eng.html

Here’s a clip of this daughter of Osun in action:

I am moved by Indra’s spirit and wisdom. Here’s what she had to say in our recent interview.

“To be perfectly honest. I sing for myself. I sing for my own wellness. It’s something that I’ve always had to do. It’s like I have to breathe; I have to sing. That’s what keeps me going. It heals me from the inside. And when I find that other people feel a similar feeling, I feel even more compelled to do it. It’s not just helping me; it’s helping other people. It’s serving a higher power.”

When It All Began

“I first started singing when I was about four or five years old. I would sing to myself because it lifted me up. And you might think, ‘why does a four-year old child need lifting up?’ I had a good childhood. I was not abused or anything. Everything was fine. But even though everything was fine, I still needed lifting up. You don’t need to be sick in order to be healed. I think everyone needs lifting up. No matter what state you’re in you can always be higher. Higher in the sense of connectedness. For me, that’s what healing from the inside means. It means feeling more connected because we can have moments throughout the day where we find our mind wandering or perhaps we’re too far up in our head and we don’t feel connected. Connected to what? Connected to one another, the universal force, to love, to creativity, to that magical thing that happens that no one can put a name to.”

Her Love For The Orisas

“I’ve been surrounded by Santeria my whole life. Growing up in the lower east side of New York, there were lots of santeros and santeras. You would see people dressed in white and people would whisper, ‘Oh, he’s making santo, oh, she’s making santo’. My mom would always worship Yemoja because she’s a daughter of Yemoja. For me, I always knew I was a daughter of Osun. Whenever I would hear her name, I knew that she was mine and I was hers. It was not even a question in my head. Ironically, I found out from Mom that I had this little wooden figure that I would play with growing up. I asked Mom one day, ‘What is this wooden figure?’ She said: ‘I got it from a friend of mine when I was pregnant with you but didn’t know I was pregnant. He said: ‘This is from Nigeria. This is the fertility Goddess, Yemoja.’ When I heard that story, I had to learn more about the pantheon of Gods and Goddesses.”

Being Open About Her Faith

“I’ve been open about my spirituality since 2002 because when I was in college, I was studying Afro-Latin literature. I had a professor who was an iyawo at the time, and she invited me to a ceremony for Obatala. During the ceremony, Obatala recognized me as a daughter of Osun and I started to cry. He gave me a gift – a white cloth with gold figurines on it. And I remember thinking, ‘I can’t take this. I can’t accept this.’ But I couldn’t reject it because it was coming from Obatala and I felt such love for him. As soon as the ceremony was over, I tried to hand the gift over to one of my professor’s, and she looked at me and said, ‘Don’t ever reject a gift from God.’ And I said, from this moment on, I’m going to be ‘out and about’ [my faith]. It’s a spiritual gift to be cared for by a Goddess or a God – a piece of the divine energy that is connecting all of us. I can’t reject that gift nor should I hide in the shadows because others might not understand. This is something to be proud of. To be happy about. It’s a beautiful thing. It’s such an immense blessing that when I think about it, I want to cry. I feel so utterly protected, loved and cared for. During a storm, I literally feel like I am being picked up by the energies of the orisas. It protects me, loves me, and informs me when I can’t think. I don’t need to think. I just need to be quiet and listen. I feel very lucky because there are so many people who are lost. They don’t know up from down. They read books trying to find their way and that’s good. But I feel lucky that, at an early age, I could feel the energies of the orisas. I could give the energies a name, and they could live in my life.”

Before She Hits The Stage

“I always say a prayer to help me get out of the way. What I do on stage is not about performance. I’m not there to entertain. I’m there to get out of the way. My physical body contains a voice that is anatomically pretty. God created vocal chords in my throat and in my neck that operate in such a way that they produce a beautiful sound. That’s fine and dandy. There are lots of people like that. But there’s a special juice in my vocal chords and that’s God – that’s God delivering what God needs to deliver. And so I try to get out the way.”

“We’re doing a song for Osun on the 3rd CD. Part of me was like: ‘Do I dare do this?’ And the answer was ‘Yes! Yes! Yes! Let’s do this. There are always those people in our community that are gonna say: ‘You didn’t do that properly. You need to do the songs in the right order.’

Well, call me naive, but I really feel that if you do things with the right intent, that means more than the ritual. The ritual is a process that we carry forward generationally to embody something that is more than the physical. Ritual exists for a purpose and that purpose is important. But the intent is 99% of it. If you go in there with the wrong intent, but the right ritual, what’s that going to serve? I feel moved to do this song, and if I do it with all my heart, and Osun knows how much I love her, then how can I go wrong?”