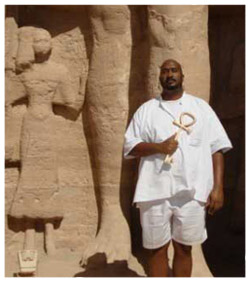 Driven by Numbers, Patterns and The Divine

His passion for mathematics began early in life…

Sangodare Brown was six years-old, in the first grade, and his father had just introduced him to multiplication tables.

But he was hungry to learn more.

So when Sangodare found out his older sister, Philippa, was studying high school algebra he wanted to learn it too.

Then, in the second grade, when his brother was given the high school assignment of memorizing the names of all 38 U.S. presidents, little Sangodare took on that challenge as well.

Even now, at 43, Sangodare’s quest for knowledge has no end…

Not only does he have B.A. degrees in both mathematics and computer science, he’s a scholar of comparative religion, a numerologist, an astrologist and an initiated Ifa priest.

And he’s modest too…

I was impressed when I learned that this brother once worked as a software engineer for NASA’s Space Shuttle Program. That’s right — his team was responsible for making sure that the mechanical arm and the display panels on the space shuttle worked properly.

But Sangodare tends to downplay that achievement…

Here’s what he had to say in our recent interview:

How Math Is Related to Spirituality

“When you’re dealing with spirituality you’re dealing with unseen forces. The principles that govern mathematics are the same principles that govern the unknown. Math is one of the keys that will enable you to go beneath the surface. It’s always there but it enables you to see what’s there. Most people have no clue about what’s there. Mathematics is the key to everything we know of in existence. It’s the language of how everything in the universe communicates with each other. When we are solving math problems, we must learn how to balance equations, positive and negative numbers. In spirituality, we must learn how to balance positive and negative forces inside ourselves.”

Why Passion Is The Key

“If you don’t have a passion for something, you’re not going to love doing it. That’s why people start to hate their jobs. That’s why they get fired – it’s because they are not on the road to fulfilling their destiny. They have not stepped into their purpose. I know individuals who go to school and get a degree in something, not because they love it, but because they think they will make more money. Don’t worry about the money. Do what you want to do. Do what makes you happy.”

The Biggest Misconception About African Spirituality

“The biggest misconception is that it’s demonic or that they don’t believe in one God, But If you study the oldest versions of Christianity, you can see the connection between African spirituality and the traditional Western religions. Even people who study ancient Egyptian culture and history are not comfortable around indigenous African spirituality. It’s a tragedy that we’ve been conditioned not to love our own.”

“I’m driven by the esoteric, by cosmology. I’m driven by religion and philosophy, but at the same time I see numbers and patterns and I connect the dots.”

What To Expect In A Reading

“A reading should confirm what you already know. Then, we can expand that reading and we can look into the future to see what type of energy is governing your future and offset any pitfalls that we see might be coming your way. At the same time, there are things that we can do to enhance that which is positive.”

Sangodare Brown can be contacted at: 281-973-6666 or by email at cbrown@ganphilosophy.com

By James Weeks/Producer, Across The King’s River 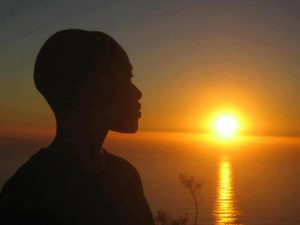 Does Your Relationship Uplift You?

My client had finally decided to leave her husband.

And after she made that difficult decision, a peaceful energy surrounded her and the logic of why it made sense to leave that unhealthy relationship became clear.

“The revelation that it’s time to end this marriage was beautiful. I’m super, super excited,” she said. “I rejoiced. I was actually singing. It was awesome.”

I couldn’t believe what I was hearing…

Previously, this client had been struggling with fear, grief, desperation and despair. But now she was coming from a place of strength. A place of joy and optimism.

“I’m creating what I want for my life and for my children,” she told me.

Listening to my client talk made my day. It was like witnessing the birth of a new human being. An enlightened being who was finally awakening to her own power, her own voice, her own mind, her own potential.

Such a being can never be held prisoner again…

Yet, even though my client said my Ifa spiritual readings helped to equip her with the clarity and insight she needed to move forward, I can’t take credit for the dramatic change.

She had to see the need for change herself. I’m glad the light finally came on, and I pray the light of self-love and self-respect and self determination will continue to burn brightly.

Are you in an oppressive relationship like my client was? Are you free to think for yourself, be yourself, and express yourself?

Do your spiritual beliefs and practices uplift you or do they imprison you?

And what about your spiritual teachers? Are they empowering you or are they just empowering themselves while holding you back?

Relationships should uplift you, support you, inspire you…

But if your relationship revolves around despair, depression and oppression, maybe you should consider doing what my client has courageously done.

Know when you’ve had enough and move on with your life.